Please Note: This page contains images of a hare being skinned

The hare is native to Britain, unlike the rabbit which was a Medieval introduction. The hare has always provided meat esteemed for the table. The successful hunter carrying a hare was a standard Roman motif to depict Winter. In the Medieval period, the hare was classed among the Noble Quarry to be hunted by the aristocracy. There are many later Folk Songs detailing the fate of those who tried to obtain this delicacy illicitly.

Rent a Peasant is always keen to re-connect the public with the concept that meat comes from animals and comes wrapped in fur, not clingfilm. Hare and rabbit, when appropriate for the period portrayed, form a regular part of the Rent a Peasant background display. In this modern world of plastic and animatronics, the public has general belief that much of our display is not “real”. Stroking the fur of a dead animal and seeing blood drip soon convinces the public that our exhibits are real. Skinning a hare or rabbit is a distinct novelty for the majority of our audience these days. The initial reaction is usually “Ugh!” but interest is soon caught and develops into an educational session involving the anatomy and biology of the animal, as well as cookery.

This series of photographs was taken at Ayr Agricultural Show in 2003. Among our audience were the chefs from the cookery demonstration, who had never skinned a hare or rabbit themselves and carried off a leg of rabbit to try out. There was a great deal of audience participation with such questions as “What’s that bit?”, “Where’s the heart?, Can I see it?” and fierce competition at the end to take home the tail fur. 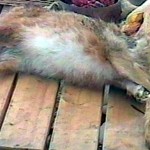 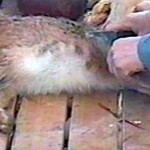 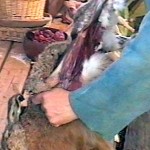 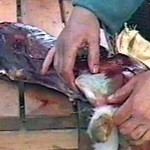 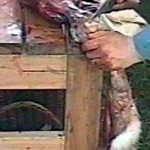 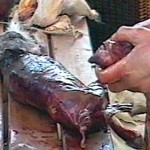 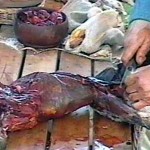 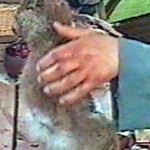 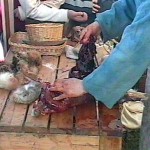 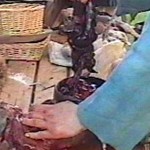 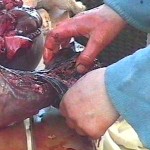 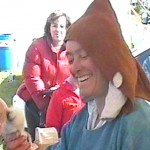