Recognition of a standard method of carcase dismemberment
(originally presented as a paper at the International Conference of Archaeozoology, Durham 2002)

The role of the carver at table has always been of importance in acknowledging the relative status of the diners by the portions allocated. Our modern methods of carving are rooted in the nineteenth century, with such detailed instructions as those provided Mrs Beeton’s Book of Cookery and Household Management. 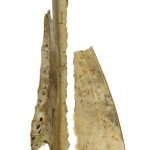 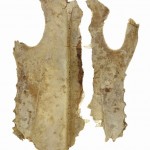 Interest in this topic was stimulated by the realisation that the goose sternum, in particular, on a variety of Medieval and Post-Medieval sites had been dismembered in a prescribed manner that is unlike our present conception of how a goose should be served. The finds of all the adjoining sternum fragments and associated limb bones from excavations in Berwick and Richmond, N. Yorks, prompted further investigation of the historical documentation for the serving of goose. 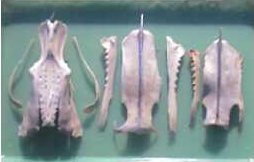 A facsimile printing of the 1638 edition of John Murrel’s Two Books of Cookerie and Carving provided detailed instructions on how to “Reare the Goose”, which would produce cut marks identical to the archaeological finds.

You must breake a Goose up contrary to this fashion.

Take a Goose being roasted, and take of both the Legges faire like a shoulder of Lambe, take them quite from the body, then cut off the belly piece round, close to the lower end of the brest: then lace her downe with your knife cleane thorow the breast, on each side your Thumbs breadth from the bone in the middle of the breast.
Then take off the Pinion of each side, and the flesh which you first laced with your knife, raise it up cleane from the bone, and take it cleane from the carkasse with the Pinion.
Then cut up the bone which lyeth before in the breast, which you commonly call the Merry thought, the skin and the flesh being upon it. Then cut from the breast bone another slice of flesh cleane thorow, and take it cleane from the bone : then turne your carkasse, and cut it asunder, the backe bone above the loyne bones, then take the Rumpe end of the Back-bone, and lay it in a faire Dish, with the skinnie side upward, lay at the fore-end of it the Merry-thought, with the skinne side upward, and before that the apron of the Goose : then lay your Pinions on each side contrary, set your legges on each side contrary behinde them, that the bone end of the legges may stand up crosse in the middle of the Dish, and the Wing Pinions may come on the outside of them.
Put under the Wing Pinions on each side the long slices of flesh which you cut from the breast bone, and let the ends meet under the legge-bones, and let the other ends lie cut in the Dish betwixt the Leg and the Pinion: then powre in your sauce into the Dish under your meate, then throw on Salt, and set it on the Table.

To test the accuracy of this method, a goose was roasted and carved according to the instructions given. The resulting bones are not as close to the archaeological specimens as anticipated. The Medieval carver did not have a carving fork to assist in the operation. This is the critical difference between ancient and modern carving. Being overly anxious to eat the hot goose, we endeavoured the carving when the bird was, literally, too hot to handle. Further experimental work, with a bird that had cooled further, is shown in the accompanying sequence of pictures. 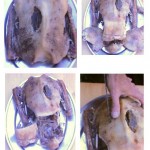 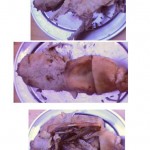