Rent A Peasant » About

Rent A Peasant was started after several years’ peripheral involvement with other Living History and Re-Enactment groups. The Silver Jarls of the Dunholm and Northumbria branches of the Vikings, in particular, were a formative influence. While an undergraduate, Paul had been asked to provide authentic banquets. An interest in the meat led to an interest in the animals and an invitation to take some sheep to Lindisfarne in 1993 for the 1200th anniversary of the first Viking raid there. This saw the first hasty costume research and even more hasty costume making. There are many faults with these early outfits but they will not be replaced until they fall apart!

This got us thinking that there were a lot of warriors in all eras of re-enactment, some horses, lords and ladies and households of liveried retainers. There seemed to be a dearth of the basic food producing farmer, whose produce and rents maintained the whole edifice of the rest of society. It seemed there was a niche here that we could fill, so Rent A Peasant became an entity in its own right. 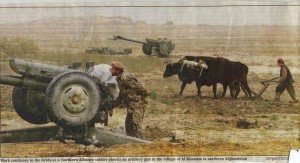 This picture from the recent war in Afghanistan neatly illustrates the stance taken by Rent A Peasant. In the midst of the high tech war zone, the low tech farmer has to continue with his occupation, which is fundamental to the survival of all levels of society.
The Victorians encapsulated this neatly in the rhyme The Four Alls:

[cryout-multi] [cryout-column width=”1/2″]Principal Peasant: Louisa Gidney B.A.Hons. (Archaeology)
Archaeologist, specialising in the study of animal bones at Durham University. Part time farmer breeding Dexter cattle, Manx Loghtan and Hebridean sheep, with the Zanfara prefix. Former Joint Leader of Durham Young Archaeologists’ Club. Particularly interested in using the practical aspects of Living History as a tool for the interpretation of archaeological finds. Researches and makes costume for Rent A Peasant. Louisa is the administrator and point of contact for Rent A Peasant.[/cryout-column] [cryout-column width=”1/2″]