This period ties in with numerous sites in the North of England. Rent a Peasant has appeared at several venues along Hadrian’s Wall, particularly Arbeia and Segedunum Roman forts on Tyneside.

Rent a Peasant can help evoke the native British rural lifestyle in contrast to that of the incoming Roman garrisons, for example at excavation Open Days at Summerhill near Hartlepool, which is the site of Catcote Iron Age and Romano-British settlement, and Foxrush Farm, another IA-RB settlement near Redcar.

Presentations can be themed round the cattle and/or sheep, as part of the victualling of the forts, with the sheep also being a particular focus for textile crafts. If these livestock are required, sufficient notice needs to be given for the paperwork to disapply the 6 day standstill. Alternatively, the Rent a Peasant livestock options include Frances the mule, as part of the trade and transport within the Roman Empire, and the poultry. Cute little chicks grow into aggressive cockerels, which are plucked for the table as one of the demonstrations. Such integration of livestock and food is fundamental to the Rent a Peasant ethos.

Food can be explored from the luxury of the Commandant’s table, using the recipes of Apicius, to basic rations of bread, with the quern and clay oven. The range of artefacts can be used to create the ambience of a small market, contrasting local perishable produce with durable imports. Roman clay lamps feature in the Activities section, under Lighting, and Roman pastimes also fall within the Toys and Games section. 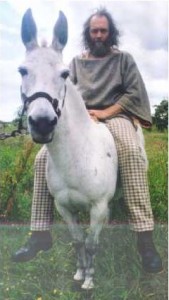 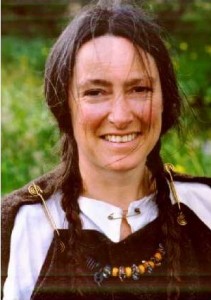 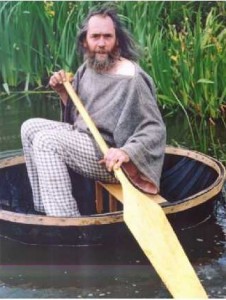 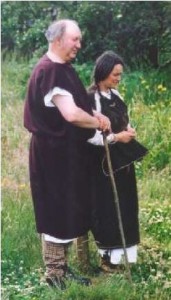 Rent a Peasant as native British at Catcote excavation Open Day, Summerhill near Hartlepool. The pond at Summerhill is one of the few sites where Paul can use the coracle. Inauthentic footwear when riding Frances is on H&S grounds.

We also feature this period for school visits, within the overall Invaders and Settlers history section, with the following general characters: 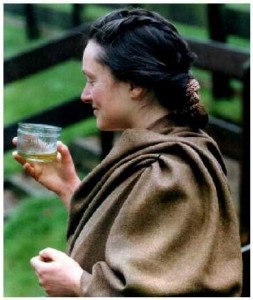 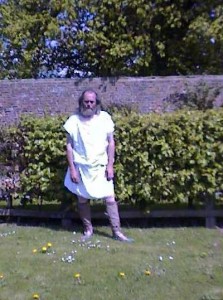 Drusilla and Paulinus are native freeborn Romano-British farmers, with a hill farm in (example Weardale). Over the years the family has made money by supplying cattle, both as beef and draught oxen, to the Roman army at (example Binchester) and developed a taste for Roman consumer goods. Paulinus still clings to his Celtic trousers but otherwise enjoys a Romanised lifestyle, especially the wine in the tavern in the vicus at Binchester!

There are also lots of sheep on the farm. Sometimes Paulinus has with him a freedman who is now a shepherd, given his freedom after rescuing Paulinus during a wild boar hunt. Cereal crops for bread and beer are grown on the farm and vegetables in the garden.

Drusilla still spins the wool from the sheep, though she has slaves to help and to weave woollen cloth to sell. The wives and daughters of the soldiers at Binchester also buy raw fleece so they can spin and weave the cloth for their own clothes.

Now they are getting older, Drusilla is thinking of replacing their wood and thatch round house with a new stone built Romanised house with hypocaust heating, wall paintings and a bath house. Drusilla enjoys using the Roman bath in the vicus at Binchester and is very proud of all her equipment for the bath. Drusilla is literate and has her writing tablets to hand as she keeps the accounts of any buying and selling of produce and payment of taxes. Drusilla sits in a basket work chair and keeps her spinning and jewellery box to hand. 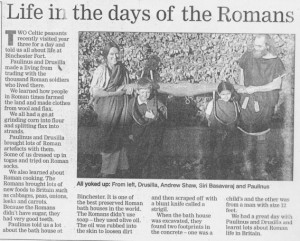 We have a Roman recipe in our food section, click here 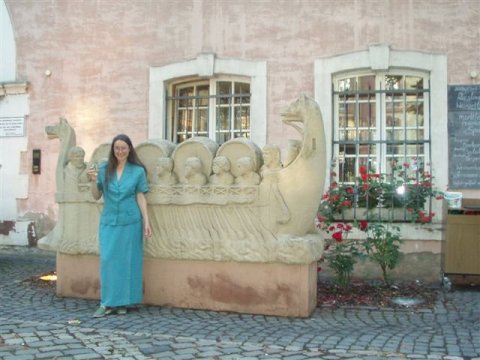 In 2005, Paul and Louisa joined the Hadrianic Society’s Study Tour of Roman Germany. Louisa is seen here in Trier, at one time capital of the western Roman Empire and so the seat of government for the provinces of Britain. Louisa is sampling the principal export of the area. Wine beakers from the Trier region are found at Roman forts, such as Binchester, in the north of England, showing trade contact between the two areas. Wool from Britain may have been traded in exchange for wine.