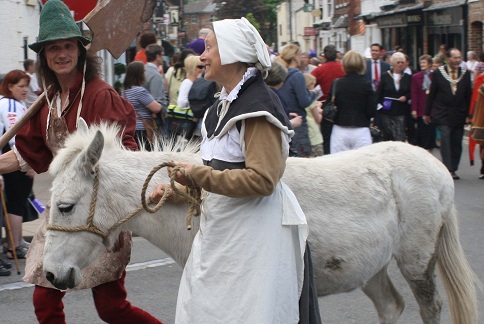 The closing years of Elizabeth’s reign are taken as a point to review the achievements of the Tudor dynasty. We have based our characters for this period on a real person, Thomas Tusser who was a gentleman farmer. The original Thomas Tusser wrote a treatise on farming, in verse, called 500 Points of Good Husbandry. This work also covers much of the duties of the housewife and dairymaid and is used as the foundation of our Tudor option.

This period is popular at historic sites for its specialised cookery option. Bess Tusser prepares “Banquetting Stuffe” using that expensive commodity, sugar. The clay oven is used for baking and other dishes are prepared over the chafing dish. Thomas can look after the oven while recounting the adventures of seafarers, such as Sir Francis Drake, and shows some of the strange new foods they discovered. Toothache from sugary food and lung disease from tobacco can both be blamed on the Tudor explorers!

Sometimes Master Kit is available to beguile the young with a range of toys or Mistress Cicely helps Bess with the cooking.

This period is also in demand for school visits.

In this era Thomas and Bess are moderately prosperous yeoman farmers, keeping the usual range of farm animals, growing crops in the fields and vegetables in the garden. Thomas and Kit are prepared to use bill hook and pitchfork against any Border Reivers who stray our way. Bess has a new bird in the poultry yard, the turkey. Bess also grows lots of herbs in the garden. Some are for cooking with. Other herbs are grown for the medicines which Bess makes for the household. These also use ingredients from our animals such as sheep’s dung and suet. Thomas likes the plague water that has wine in! Bess also grows plants to dye wool with. Some of the coloured wool is used for the embroidered bed hanging.

There is now an established market where Thomas can sell cattle and sheep and Bess can sell butter and cheese. Thomas likes to spend his money on a Bellarmine jug of wine while Bess likes to buy some Delft pottery to brighten up the table.

Most of the utensils for the house and farm are still made by ourselves using raw materials from our animals and our farm , for example bone, horn, leather, wood , rushes. Bess makes clothes from wool and linen but also has a second hand velvet gown, which is now so old she will probably pass it on to the next beggar who comes to the farm.

The Robe of Skulls

This was a lockdown project inspired by the book of this title by Vivian French. The garments are based on 1580’s patterns in Janet Arnold’s Patterns of Fashion series and the hat design is from the Tudor Tailor. It was worn for Hallowe’en at the Whitby Goth Festival. Eventually it will be worn at the Morpeth Gathering when the planned Northumbrian legends and folklore theme eventually takes place, possibly in 2023. Bookings before then for spooky or Hallowe’en events welcomed. 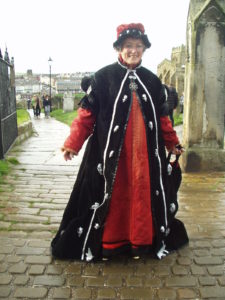 The Robe of Skulls (Front) 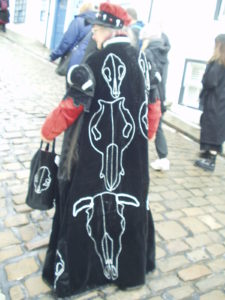 The Robe of Skulls (Back)

Since 2002, Rent a Peasant has appeared in the William Turner Garden at Carlisle Park in Morpeth during the Morpeth Northumbrian Gathering. Each year, a cookery theme has been taken to link in with the life and times of William Turner. For 2006, the Gathering had an International theme. William Turner journied on the continent, so some fifteenth century recipes from France and Italy were tried, as being dishes that William might have tasted on his travels. 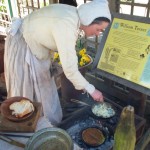 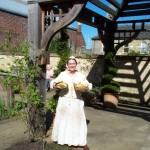 We have some lovely letters of thanks available to read from some of the children of Mowden Juniors School that we visited for a Tudor demonstration. 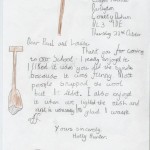 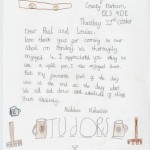 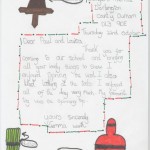 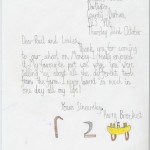 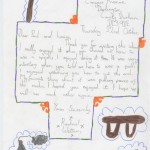