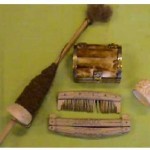 Objects made of bone survive in archaeological deposits much better than horn items. Bone is a much denser material than horn and different techniques were used to work it, the simplest being simply whittling with a knife. Comparatively few bones from any one animal were used to make artefacts as the marrow inside beef bones was prized for cookery. Since one beast has only two horns, only a couple of the leg bones would be needed to make a similar number of objects.

Some objects made of horn, such as spoons, were also made in bone but were much smaller because constrained by the size of the raw material. Bone spoons were traditionally used for boiled eggs and mustard. Pins, for the hair and clothing; needles, for netting as well as sewing; and combs are found when made of bone, where their horn counterparts may have totally decayed.

Some standard items were made of cattle bone, such as the head of the femur (thigh bone) for the whorl, or weight, on a spindle. Knife handles were commonly made of two flat plates of bone riveted onto the metal tang of the blade.

Dice were made from solid sections of leg bone shafts, hence the expression “rolling the bones”. Historical examples are often found to be weighted in favour of the six! Gaming pieces include both flat counters and more decorative upstanding items like chessmen.

The naturally curved shape of the ribs was used by potters to smooth the surface of pots.

The polished white surface of bone was used for decorative mounts and inlay for wooden boxes and furniture. 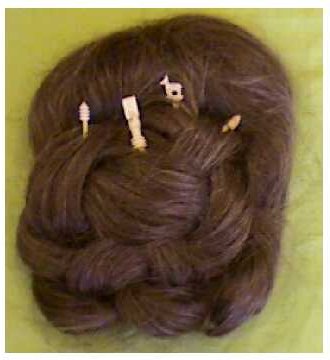